Honda has won both the Constructors Title and riders titile in the 2016 FIM MotoGPTM World Championship  and,to celebrate another victory in Honda Motorsports history, the Honda RC213Vwill be displayed first time in Bangladesh and is the real MotoGPTM racing machine which Marc Marquez (Repsol Honda Team) won the riders titile in 2013.   Bangladeshi biking enthusiasts will get the chance to see the beauty of Marquez’s ultimate racing machine.

There are many other exiting motorcycle present in the show. BHL also arranges a quiz competition for the visitors, by participating the competition visitors can win a Honda motorcycle, jacket, helmet and many other gifts.This event duration is 2nd February to 4th February, 2017 from 9:30am to 7:30pm in the evening.

About RC213V : Overcoming Obstacles to Shine Even Brighter

The RC213V was unleashed in 2012, designed specifically for the new regulations that increased engine displacement from 800cc to 1000cc. Two types of machines (1000cc and Claiming Rule Teams ) raced in MotoGPTM this year. The RC213V had increased output due to the larger engine, but as fuel tank capacity was restricted to the same 21 liters as before, so too much focus on output alone was not feasible. The 2012 model had to find the best balance between output and fuel economy. Another issue that had to be cleared was weight. 2012 regulations raised minimum weight from 150kg to 153kg.

All manufacturers built their racing machines to comply with the new regulations, but during off-season testing, the regulations were suddenly changed, raising the minimum weight once again, to 157kg. In motor sports, even an increase of 100g drastically changes the machine’s behavior.

Every team, including Honda, was forced to redevelop every aspect of their machines. As the season started, a new problem - chattering from the front tyre - arose. Honda persevered and continued developing the machine throughout the season, ending on the podium in every race, and winning 12. Honda won the constructors' title for the second year running, and its factory team - Repsol Honda Team - clinched the teams' title by winning 12 grands prix. 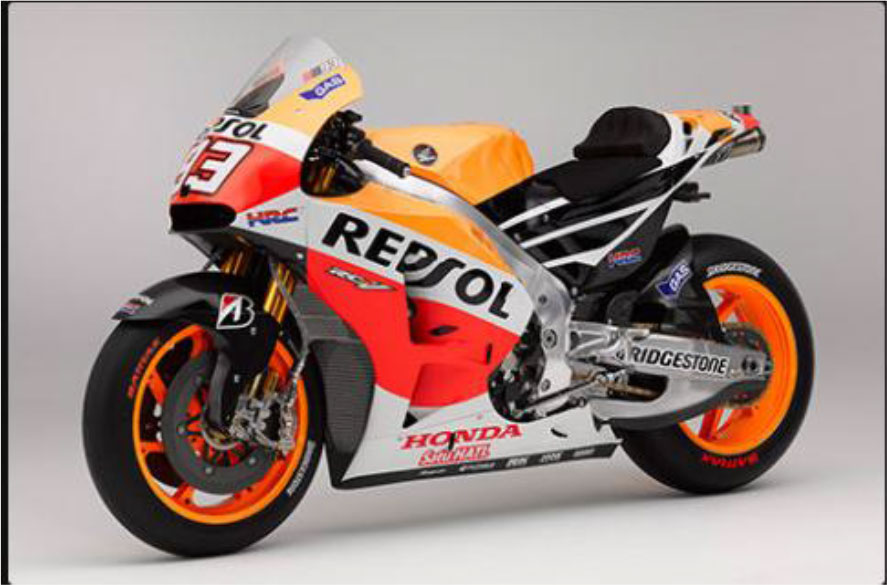 In 2013, Marc Márquez entered the premier MotoGPTM class, and with his promising talent since his

Moto2 days, rode the RC213V to victory in 6 races, becoming the world’s youngest world champion, and contributed to Honda’s triple crown. Márquez and the RC213V went on to dominate the 2014 season from the opening round winning 12 straight grands prix, giving Honda its second consecutive triple crown with a total of 14 wins in 18 races, rewriting the records including the most number of season wins.
About MotoGPTM:
Honda RC213V Specification (2013 model)

The FIM Road Racing World Championship Grand Prix is the premier class of motorcycle road racing, held since 1949.
Grand Prix motorcycles are purpose-built racing machines that are neither available for purchase by the general public nor able to be ridden legally on public roads. This contrasts with the various productionbased categories of racing, such as the Superbike World Championship and the Isle of Man TT Races that feature modified versions of road-going motorcycles available to the public.